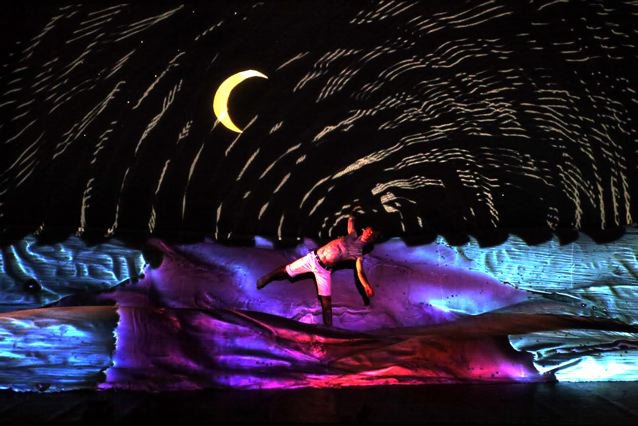 Combining circus, dance, animation and object theatre, ‘Dare to Sea’ is a new show from family friendly theatre company Peut-Être. With the friendship between a woman and a fisherman as its main focus, the piece uses clever set design to transport the audience from a sandy beach to the depths of the ocean. Giant sheets – fluttering and stretched across the stage – represent choppy waves and the nervous couple leap between these, tumbling and getting caught as they move further and further out.

Silver juggling clubs form fish leaping across the waves and projected cartoon images of landscapes and marine life add depth. An encounter with two untrustworthy, mermaid temptresses brings slapstick and giggles to the proceedings. The use of juggling clubs is a smart example of object theatre but you get the feeling the performers could go further. Clara Solana and Gaëlle Cathelineau show off their circus skills as the mermaids, working with the juggling clubs in subtle ways including balancing them on their necks. This is fun but I yearn for something more dramatic.

The show is primarily a dance piece, with Colin Jolet’s capoeira bringing the standout moves as he gracefully spins and somersaults about. The performers also use their tumbling skills to add to the carefree feel of the performance. Maya Politaki is strong and varied as the female protagonist, with beautifully considered and graceful movements, combining tumbling with elements of ballet and contemporary dance. Yaniv Fridel’s original musical score is gently soothing and increases the seaside excursion atmosphere.

Directors Daphna Attias and Gaëlle Bisellach create a colourful, interactive landscape. A scene in which the whole audience is enveloped in an imaginary sea is imaginatively devised and proves an exciting turn of events for the children in the audience. Some aspects are more difficult though, particularly a scene where a creature with long, seaweed-like tendrils appears, at which point many can be heard asking their parents what exactly is going on. But overall, there is enough brightness, movement and visual treats to keep children (and their adults) suitably enthralled.

"There is brightness, movement and visual treats to keep children (and their adults) suitably enthralled"

We watched this performance of 'Dare to Sea' at the North Wall, Oxford.