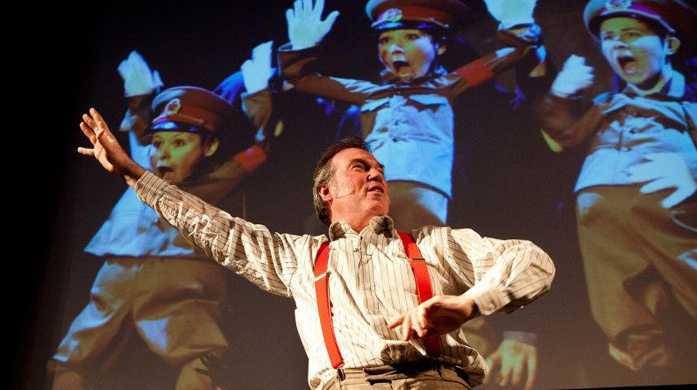 It turns out that puppetry and opera – however different they may seem – have a lot in common. Over a day of illustrated talks at the Barbican, practitioners from both worlds shared their experiences and thoughts on why the two can be combined to powerful effect. From the great visual animator and visual artist William Kentridge, to Alberto Jona, an expert in shadows, all the speakers revelled in the pairing of art forms that rely on audiences’ acceptance of artifice, their sense of wonder and their willingness to suspend disbelief.

Every breath is a decision

William Kentridge – whose work you can see at the Tate Tanks at the moment – made his first forays into puppetry using household objects to put on plays for his children’s birthday parties. He also saw the work of Handspring in Johannesburg and it was with them he collaborated on a celebrated production of Monteverdi’s ‘Il Ritorno di Ulisse’. In their take on the opera, “bastardised bunraku puppets” (his words, not mine) illustrate words delivered by singers who also work as operators alongside professional puppeteers.

For Kentridge – known for his charcoal erasing technique of animation – using puppetry was a way of doing live animation. The production combined a backdrop of his animated visuals with various puppets, including a dying Ulysses who is present throughout. One of the key tasks for the puppeteers was to keep Ulysses breathing, before his death at the end. Kentridge points out that with a puppet “every breath is a decision” and that “one thing a puppet can do better than an actor is die.”

In this version of ‘Il Ritorno di Ulisse’, each character was made up of four elements: the puppet, the manipulator, the singer/voice and the audience who, amazingly, give agency to a piece of wood. Kentridge says “puppetry makes the nature of performance come to the foreground and we see ourselves within it.” As audiences, we take pleasure in the self-deception.

Head of the Welsh National Opera, David Pountney is currently collaborating with Blind Summit and Puppet Players on a production of Mozart’s ‘Die Zauberflote’, which will play to nightly audiences of 7,000 at the Bregenz Festival in summer 2013. The outdoor stage is formed from steps and floats in a lake, presenting a unique challenge to the puppet makers.

Pountney argues that “puppetry offers variations of scale.” The production will feature enormous bird puppets, with further puppets mounted on top, not to mention huge unicorns. You may have been lucky enough to catch a glimpse of Mark Down from Blind Summit experimenting with the bird puppet designs in Crystal Palace Park.

Pountney has form when it comes to combing puppetry and opera – he worked with Puppet Players on a version of Gounod’s ‘Faust’ for the Bavarian State Opera. His first experience of puppetry is suitably memorable – he witnessed someone performing Faust with finger puppets in a divided 1980s Berlin. He describes opera as an “impure art” and explains that he is used to calling upon all resources in order to stage one.

In the reduction lies the strength

Stefan Fichert from Puppet Players also has form in this area, including a key role in the Munich Biennale’s ‘Puppet Project’. Highlights from his years working on that include a beautifully abstract, origami inspired version of ‘The White Snake’, featuring huge paper folded puppets. Another success was ‘Judith and Holofernes’ where two enormous, angular heads constructed from architectural board filled the stage and made for a dramatic beheading.

As a music lover and master puppet maker, it’s not surprising that Fichert’s loves has lead to the invention of the ‘klangfiguren’ or acoustic puppet – a figure that is both a puppet and a musical instrument at the same time. “In the reduction lies the strength” he says. Fichert believes opera and puppetry make perfect partners because both deal with “emotions rather than psychologies.”

For Alberto Jona from Controluce “everything is possible in opera and puppetry.” The company works with shadows to create stylised, abstracted and magnified live illustrations for operas. "Shadow and music are similar, complimentary languages,” he says, “shadow cannot speak but it can sing.” His passion for combining opera and shadow puppetry reveals how puppetry has the power to make magic happen.

The fact of performing is declared

The ‘Puppetry in Opera’ event at the Barbican illuminated this magic and the sense of play and wonder – for adults as well as children – that the two forms have in common. It also highlighted that the technical difficulty and skill of both helps draw them together – physical demands breed trust. Most of all, the talks and discussion revealed that puppetry and opera are self-conscious art forms where the fact of performing is declared. It is their collusion with the viewer, their joint celebration of skill, craft and high artifice, that make puppetry and opera such close companions.

Puppetry in Opera was funded by Grants for the Arts, The D’Oyly Carte Charitable Trust and The Golsoncott Foundation. It is presented by Puppet Centre in collaboration with Central School of Speech and Drama and in association with Trinity Laban Conservatoire of Music and Dance and the Barbican.

"Puppetry and opera are self-conscious art forms where the fact of performing is declared. It is their collusion with the viewer, their joint celebration of skill, craft and high artifice, that make puppetry and opera such close companions."

Puppetry in Opera was a two day event over 9-10 November 2012, hosted by the Puppet Centre and held at the Barbican and Central School for Speech and Drama.