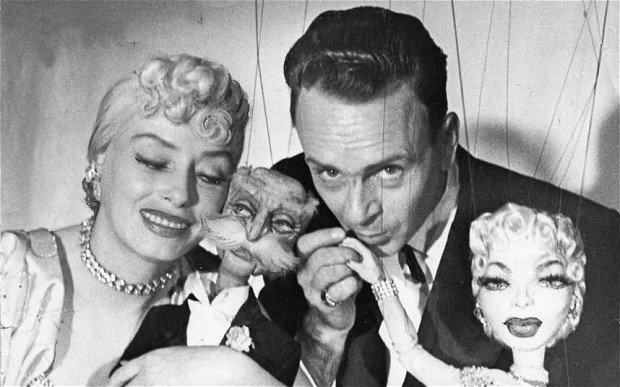 On the 9 December 2014, Clementine the Living Fashion Doll – aka Mark Mander – will introduce an audience to the loveable TV puppets of yesteryear in a one-off special at the BFI. Here Mark Mander tells us how he selected the puppets that will star in the show and the secret of good TV puppetry.

Where did the idea for this puppet-centric screening at the BFI come from?

To give you the full history...The screening is presented by my puppet character Clementine the Living Fashion Doll. Clementine is a doll who sings, dances, acts and presents, both live and on TV.

Recently, Clementine has presented ‘The Golden Clementine Awards’ at the Norwich Puppet Theatre, film nights focusing on puppetry and animation. The first one kicked off a weekend dedicated to the late animator Ray Harryhausen, and the second presented a selection of films from the Manipulate Festival. I’m just about to start work on the latest Manipulate Golden Clementines to be held on the 5 February next year.

The feedback from these events has been very positive, so I took the format to the BFI to see if they might be interested in it. As luck would have it, they were thinking of putting together an evening of puppet films. It was one of those rare moments when preparation and opportunity came together!

Do you have criteria for which puppets make the cut and which do not?

Most of the puppets featured were selected by the BFI, and they had a very clear idea of what they wanted. Puppets with ‘attitude’, or to put it another way, characters who have so much personality that one remembers the personality as much as the fact that they were a puppet. I suggested Hartley Hare, as he has a huge and memorable personality!

How did you settle on your final selection and which characters can we expect to see?

The BFI want to show rare clips of puppets that haven’t been screened for decades, or those that are difficult for the public to access. Clementine will also interview one or two of the puppets including Mademoiselle Zizi, who was the late master puppeteer Frank Mumford’s glamourous torch singer marionette. The film ‘An Attic Full of Puppets’ was made about Frank’s life last year.

The bulk of Zizi’s performances were live at fantastic nightclubs on the continent during the 1950s and 60s. Zizi agreed to be interviewed (with the kind help of Darryl Warby operating and Frank’s niece Jennie Allen providing Zizi’s voice), in what might be one of her last ever performances. It is very special to include her in the show.

I must stress that no puppets were rejected- the process wasn’t remotely like the X Factor! The full guest list of puppets stars is:
Muffin the Mule
Hartley Hare
Lenny the Lion
Topo Gigio
Lamb Chop
Pinky and Perky
Basil Brush
Mademoiselle Zizi
Lord Charles

Why do these puppet characters of yesteryear still have appeal?

Interesting implication in your question: that because something is from the past it will automatically loose its appeal. I know I was guilty of thinking the same, it did cross my mind that the puppets might be out of date and irrelevant, until I saw the preview clips at the BFI.

What hit me instantly was that each puppet had great presence. Some may be in black and white, some may have slow editing, but each has very strong character traits. Be they silly, flirty, quick witted or even snobbish, each puppet has very clearly understandable human reactions and emotions, which is essentially what makes any puppet character of any era appealing. All of the puppets were very well known in their day and it’s easy to see why, they all have a certain star quality.

What makes good TV puppetry? How is it different from live performance?

It’s possible to see examples of slick, fast talking lip sync – where puppet eye lines are perfect and complex technical puppetry is executed flawlessly – but the script is dull and un-engaging. On the other hand one can see early marionette TV puppetry where the puppets do little more than bob about but the entire production has great charm.

I wouldn’t want to have to precisely define anything as broad as ‘Good TV Puppetry’ but I do know that it’s not just about being technically excellent, though of course any mistakes can now be seen up close in HD. Equally, it’s not enough to rely on charm now – a certain level of competence is demanded.

Live performance is very different. The performer is breathing the same air as the audience and it’s more about creating a pact between the two. It’s closer to hypnotism I think, everyone in the room believing that the puppet is alive.

Technically, TV and live performance can feel quite different to the performer but ultimately they have to convince either the live audience or TV viewer that their puppet is alive, and that what the puppet is doing or saying is worth watching or listening to. It works when charm, technical ability and content come together.

This screening focuses on a hey day in a past that’s getting more distant; is puppetry still alive and well on the TV today? Who should we watch out for?

Of course, there only used to be a handful of channels but now there are so many, with each programme maker chasing an ever tinier proportion of the market. Producers want to avoid risk and puppets can be seen as ‘risky’, more time consuming, complex and expensive to shoot than, say reality stars.

Having said that the BBC has just started screening Furchester Hotel, one of its most expensive puppet projects ever, and over at Sky Yonderland is currently shooting its second series. Gerry Anderson’s son Jamie Anderson’s Firestorm puppet project has reached it’s kick-starter goal and I will certainly be watching out for that!

How have TV puppet design and TV puppetry techniques evolved over the last few decades?

When puppets first appeared on TV (and of course a ventriloquist doll head was the very first image to be broadcast by John Logie Baird on his experimental TV system), the puppets that appeared were often literally taken from stage productions. Puppets that were designed to be seen live, at a distance, under theatrical lighting, were put in front of the TV cameras.

The TV screen is all about the close-up on the human face, and puppeteers quickly adapted their figures, giving puppets moving mouths and blinking eyes. Jim Henson changed the face of TV puppetry with The Muppets, probably the first puppets to be designed specifically for the requirements of the TV screen. Spitting Image used the same basic idea of a Muppet, but went down a sculptural route with characters of the great and the not so great in foam latex in the 1980s.

Film budgets allowed the development of complex animatronics and puppets could suddenly have a range of facial expressions. These were quickly factored in to TV puppet productions with big enough budgets. Now most puppets on TV are some variation on the ‘Muppet Mouth’ style puppets but they might have animatronic or even CGI elements.

One of the puppet films I viewed in the BFI screening room featured a locked off still camera shot that lasted almost five minutes. Yesterday a friend told me about VINE videos, which are viral films that last eight seconds. This shows why puppets have evolved. They have kept pace with the changing way in which viewers process information. Audiences are very visually literate now and can process and understand situations on the screen very quickly. Puppets have needed to become slicker and adapt to the confines of being seen in extreme close-up on screen, rather than from the back row of a theatre.

And finally, who is your all time favourite TV puppet star?

Miss Piggy! I wouldn’t want to draw any parallels with a certain Clementine doll...But they are both “Natural Blondes’’ who can sing, dance act and present. And they are both puppet divas, though Clementine draws the line at kissing frogs.

"Be they silly, flirty, quick witted or even snobbish, each puppet has very clearly understandable human reactions and emotions, which is essentially what makes any puppet character of any era appealing. All of the puppets were very well known in their day and it’s easy to see why, they all have a certain star quality."

'Celebrating Puppets with Attitude' will screen at the BFI, London at 6.10pm on Tue 9 December. Watch the trailer here.